Stuyvesant Heights is a neighborhood in north-central Brooklyn, a part of New York City settled in the mid-17th century before the borough of Brooklyn was incorporated as a city. The area can boast of some of Brooklyn's most handsome and historic brownstones and grand old apartment buildings. Stuyvesant Heights is one of the four neighborhoods comprising the widely known enclave of Bedford–Stuyvesant. Streets in Stuyvesant Heights were named after Prominent figures in American history. Francis Lewis was a signer of the Declaration of Independence, Bainbridge, Chauncey, Decatur and MacDonough were all naval heroes of the Tripolitan War and the War of 1812. the Dripps Map of 1869 shows that the area was still largely rural with a few freestanding houses mostly on MacDonough Street. The real development of the district began slowly at first, accelerating between 1885 and 1900, and gradually tapering off during the first two decades of the 20th century. Construction of masonry row houses in the 1870s began to transform the rural district into an urban area. The first row of masonry houses in Stuyvesant Heights was built in 1872 on MacDonough Street for developer Curtis L. North. In 1880s and 1890s more rows were added, most of the Stuyvesant Heights north of Decatur Street looked much as it does today. Stuyvesant Heights was emerging as a neighborhood entity with its own distinctive characteristics. The houses have large rooms, high ceilingsm and large windows.The neighborhood merged with Bedford in 1930 to become the hyphenated name Bedford-Stuyvesant. During this time major change took place due to the Depression years of the 1930s. Many of the original property owners had become either too old or too poor to maintain their spacious quarters. More and more dwelling were sold to Blacks, who were attracted from Harlem to the South. There is a solid tradition of private home ownership, good schools and the relatively smoke free air. This created the second largest Black community in New York. It has a historic district between Throop Avenue and Malcolm X Boulevard just north of Fulton Street with well-kept brownstones with middle-income African American families residing in them. Many churches are well known in the area, including Our Lady of Victory, Our Lady of the Presentation (both Roman Catholic Churches), and the United House of Prayer for all People.

Our website features the best Stuyvesant Heights real estate search for homes, condos, land and foreclosure properties available. It is the only site you will ever need! It is easy-to-use and updated by the official REALTOR®’s database every 15 minutes.

You can save searches, and get daily email alerts of new listings, price changes, sold data, and market reports. Our Interactive Map Search allows you to view properties on a map or refine your search by drawing the boundaries around the area you desire.

Contact us today to find out how we can be of assistance to you!

Welcome to one of the last pieces of suburbia left in the city. 161-18 96th Street is nestled in the quiet, tight knit neighborhood of Howard Beach, Queens. This move-in ...

Welcome home to this classic prewar one bedroom one bath CONDO located in Midwood. Step into an elegant lobby with beautifully detailed crown molding and marble finishes....

Introducing this cozy condo with an elevator in Sunset Park! This 525 sqft space features 1 bedroom, a living/dining room combo, kitchen, and a full bath. Both rooms have...

Welcome to this Canarsie country gem. This legal two family home is situated on an oversized 40x100 lot with gorgeous garden, lots of space for entertaining and private ...

Welcome to this legal 3 families home in the prime Sunset Park location. The building size is 20X52 with a lot size of 20X100. It has a full basement with three front, ba...

Introducing an amazing opportunity to own a 2 family home located in the prime area of Sunset Park, Brooklyn. Then building size is 20x52 and it is sitting on spacious lo...

Welcome to Brighton 5th Condominium! Nestled in one of the busiest location near Brighton Beach Avenue, this condominium is filled with pristine 1 and 2 bedroom units. Yo...

Situated on one of the most sought after blocks in the heart of Carroll Gardens, 99 is a 4 story brownstone conveniently located just steps away from Court Street. The b...

Welcome to Sheepshead Bay and this First Time on Market for over 20 years East 17th Street (aka 1623 Avenue X). This gorgeous 2 family corner brick, semi detached home i...

WELCOME TO ONE OF THE MOST CHARMING SINGLE FAMILY HOMES IN THE BEAUTIFUL NEIGHBORHOOD OF HUGUENOT. PARKING WILL NEVER BE AN ISSUE AS THIS HOME COMES WITH A DEEDED PARKI...

Introducing an opportunity to own a 2 family home located in Clifton, Staten Island. The property features a spacious backyard perfect for family activities all year roun...

Introducing an opportunity to own a single family home located in Arrochar, Staten Island. The property features a spacious back, front, and side yard perfect for family ... 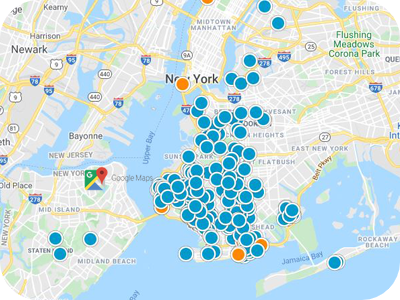